Nashville, Tenn. (April 20, 2020) — Country Music Hall of Fame member Charlie Daniels and his veterans non-profit The Journey Home Project (TJHP) are joining forces with another non-profit group, Code of Vets, to aid former U.S. servicemen and women who are suffering amid the COVID-19 pandemic. Today the country music and southern rock icon announced the partnership between the two organizations. Their collective mission is a call to action to seek public donations for vets suffering from economic hardships as well as those who have contracted the virus.
"Gretchen Smith and the folks at Code of Vets cover the guys below the radar, the ones with immediate needs and no place to turn, with a rapid deployment type response to veterans in desperate circumstances," says Daniels. "These are same veterans who put their lives on the line to protect our freedom. Our nation is pretty distracted by the Coronavirus pandemic we’re all dealing with, but the need in the veterans world goes on, and the urgent need for funds is truly critical. I would ask you to join The Journey Home Project in supporting Code of Vets in providing for the needs of our most worthy citizens."
There are many stories from Americans during the COVID-19 crisis but for weeks there has been a group suffering in silence: our veterans. Most days these men and women battle PTSD, Traumatic Brain Injuries (TBI), hunger, homelessness and unemployment, but do their best to stay afloat. Code of Vets, a 501c3, has been on the front lines assisting a large number of veterans and their families, finding those in need of even the most basic items such as food, running water and electricity. Some have been infected with the virus itself.
“We are operating under emergency conditions with this alarming spike of veterans in crisis," explains Code of Vets Founder Gretchen Smith. "Please donate to assist with basic needs like food, housing and utilities. Our veterans matter. Every dollar matters. It is on us to take care of our own.”
“I've watched the amazing work that Gretchen and her team have done over the past year," notes TJHP co-founder and Daniels' manager David Corlew. "It's a natural fit for us to team with Code of Vets during a critical time such as this. Our Veterans need us. They fought for us so it's time for us to return the service. We can do this."
In pre-COVID-19 times Code of Vets assisted veterans with mental health crisis, unemployment, housing and transportation, among others, but they are now encountering dire situations that they never expected. Pressing issues include: This is only a glimpse into COVID-19’s effect on the veteran community.

“It is no longer business as usual. The urgency of these needs require all of our resources all of the time and we need more Americans to step up for our veterans as they did for them,” adds Smith.
Daniels and The Journey Home Project urge the public to donate to Code of Vets during this trying time for our nation’s military heroes. Donations can be made at codeofvets.com.
About Charlie Daniels
From his Dove Award-winning gospel albums to his genre-defining southern rock anthems and his CMA Award-winning country hits, few artists have left a more indelible mark on America's musical landscape than Charlie Daniels. An outspoken patriot, beloved mentor, and still a road warrior at age 83, Daniels has parlayed his passion for music into a multi-platinum career and a platform to support the military, underprivileged children, and others in need. The Charlie Daniels Band has long populated radio with memorable hits and his signature song, "The Devil Went Down to Georgia." Over the course of his career, Daniels has received numerous accolades, including his induction into the Country Music Hall of Fame, the Musicians Hall of Fame and becoming a member of the Grand Ole Opry. Daniels helps to shine the spotlight on the many causes that are close to his heart. He's a staunch supporter of the military and lends his time and talent to numerous charitable organizations, including The Journey Home Project, that he founded in 2014 with his manager, David Corlew, to help veterans of the United States Armed Forces.
For more information, visit charliedaniels.com.
About The Journey Home Project
The Journey Home Project is a not-for-profit organization that assists other not-for-profits in securing funds to help causes that benefit veterans of the United States Armed Forces. TJHP was founded in 2014 by country music legend Charlie Daniels and his manager, David Corlew. In 2018,Major General Terry "Max" Haston (retired) joined TJHP as the non-profit's newest board member. Conscious of the need to assist our nation's veterans, they have set out to partner with organizations that do the most good, with the least overhead. Working in tandem with these organizations, TJHP is making a difference in the lives of American patriots.
For more information, visit thejourneyhomeproject.org.
About Code of Vets
Code of Vets was founded by Air Force Veteran, Gretchen Smith. It is a 501c3 and exclusively uses social media to raise awareness for veterans in distress. With more than 200,000 followers just on Twitter (they have a following on Facebook as well), last year alone, Code of Vets raised over $790,000 to help hundreds of veterans with suicide prevention, housing, food, clothing, medical and transportation just to name a few — with only 1% operating costs -- nearly every penny that came in went right back out to veterans. Veterans receive near-immediate care/assistance upon request because of their unique platform. Code of Vets has caught the attention of celebrities and public figures alike including Sean Hannity, Bill O’Reilly, Sidney Powell, Larry The Cable Guy, Oak Ridge Boys, Scott Baio, Herschell Walker and even Charlie Daniels who they have an on-going partnership with. The inspiration for Code of Vets came from Sgt. Danny E. Smiley, Gretchen's dad and Airborne Angel. He was a Bronze Star Medal recipient, a 100 percent disabled Vietnam Veteran - exposed to agent orange. He lost his battle with PTSD at age 57.
For more information, visit codeofvets.com. 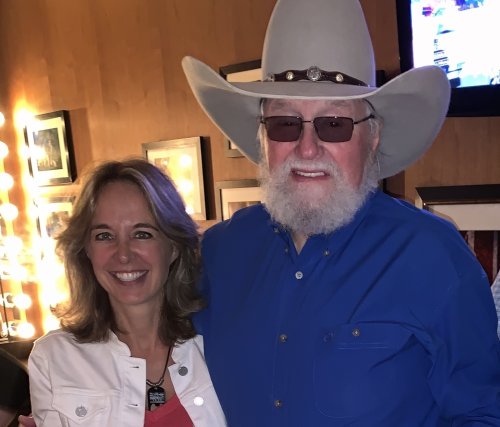 Back To Press Kit