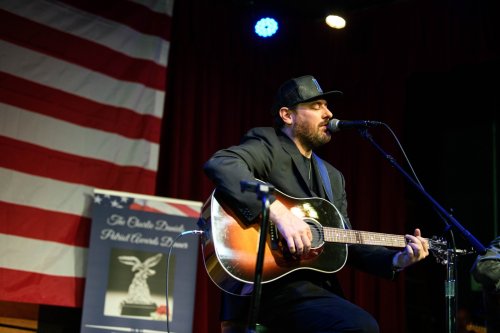 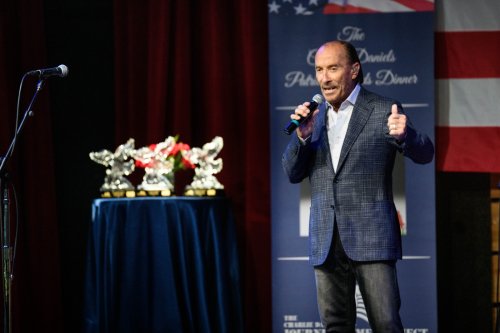 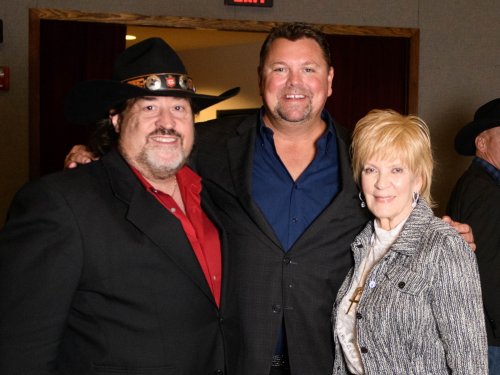 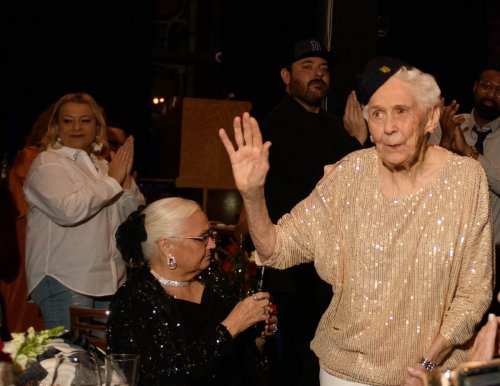 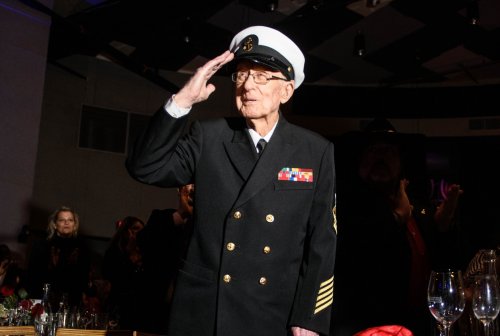 Nashville, Tenn. (November 3, 2022) — On Wednesday, October 26 at the fourth annual Charlie Daniels Patriot Awards held at the City Winery in Nashville, The Charlie Daniels Journey Home Project (TCDJHP) raised in excess of half a million dollars for our nation’s military vets.
The evening featured live performances by multi-platinum global entertainer Chris Young, the War Hippies (combat warriors Scooter Brown and Donnie Reis), as well as a surprise appearance by Lee Greenwood who performed his smash hit, “God Bless the USA.” This year’s Charlie Daniels Patriot Awards were presented to actor Gary Sinise, U.S. Army combat veteran and TCDJHP Ambassador Joel Pruitt and Nashville businessman Lee Beaman.
"Once again, those who are concerned about the welfare of our returning veterans came to make a difference," explains TCDJHP co-founder and Daniels' longtime manager David Corlew. "It was a wonderful evening of patriotism, support and caring. Chris Young, Lee Greenwood and the War Hippies all joined to make it the biggest night our organization has experienced since we began."
Sinise, a staunch supporter of the U.S. military, through the efforts of his own non-profit, theGary Sinise Foundation, was unable to attend but delivered a special video message. “I am honored to receive this award from Charlie Daniels, in his name,” said Sinise in the video. “To receive an award in his name is a blessing, a privilege, an honor. Why did I get so lucky?” Watch the full video here.
Pruitt, one of TCDJHP’s most steadfast warriors, became a close friend to Daniels in his latter years and dedicates much of his time continuing the organization’s mission. Beaman is a great supporter of military causes.
"I am both humbled and honored to receive the Charlie Daniels Patriot Award,” notes Beaman. "We are blessed to live in this great nation, and I am grateful to the men and women who sacrifice so much to preserve and protect the freedoms we have in our country. I am blessed to have the opportunity to help The Charlie Daniels Journey Home Project in supporting those great soldiers."
Special guest speakers included former New York City Police Commissioner Bernie Kerik, and retired Col. Jay Powers, former Commanding Officer, 5th Group (U.S. Army Green Beret - Fort Campbell, KY). SiriusXM’s Storme Warren hosted the dinner. Daniels' wife Hazel and son Charlie Daniels, Jr. were in attendance, as well as Congressman Mark Green. Additionally, two very special guests were honored at this year's dinner: 97-year-old WWII Navy vet Mathias Gutman and 99-year-old WWII Coast Guard vet Gladys Hughes.
Mathias Gutman came from a military family and joined the U.S. Navy shortly after the Japanese attack on Pearl Harbor. He became a coxswain on LST 553, delivering men and equipment under fire on several amphibious landings. He was part of six island invasions in the Pacific and battled Japanese forces coming from the land, the sea, and the skies.

At a young age, Gladys Hughes felt the call of duty and left college as a junior to enlist in the U.S. Coast Guard during WWII, serving as a HA1C medic. She appreciates beauty at every stage and in every avenue of life, winning 2nd runner-up in the 2012 Ms. Veteran America competition, which works to promote issues of homeless female veterans. She earned the crown of Ms. Mississippi Senior America in 2003, where she emphasized children's theater.
Corlew believes his late boss would have tipped his hat to the evening's outcome. "We even had an appearance from a combat warrior serving in the Middle East who shared his belief that what we are doing is making a major impact," explains Corlew. "Charlie would be very proud of the energy and kindness in that room. It’s an honor to be a part of Charlie’s legacy and dream to serve the servicemen and women of the United States military in such an epic way."
This year’s dinner was sponsored by Team Construction and SuperTalk 99.7.
The criteria for the Patriot Award is based on the mission of the organization: to support veterans in their return, rehabilitation, and reintegration back into civilian life. The award honors a person, persons, or group that fulfills and exemplifies the efforts and dedication of TCDJHP's purpose to continuously care, support and encourage the men, women, and families who have served our great nation. Previous recipients include Young, Darryl Worley, Mike Huckabee, Mark "Oz" Geist, Jude Seale, William Horton, Donnie Mingus, MTSU’s Daniels Center, The Shepherd’s Center and more.
About The Charlie Daniels Journey Home Project The Charlie Daniels Journey Home Project (TCDJHP) is a not-for profit organization that assists other not-for-profits in securing funds to help causes that benefit veterans of the United States Armed Forces. The organization was co-founded in 2014 by the late country music legend Charlie Daniels and his manager, David Corlew. Board members include Corlew, Major General Terry "Max" Haston (retired) and most recently in 2020, Hazel Daniels. Conscious of the need to assist our nation's veterans, TCDJHP partners with organizations that do the most good, with the least overhead. Working in tandem with these organizations, TCDJHP is making a difference in the lives of American patriots. TCDJHP’s daily operations rely solely on public donations.   To donate or for more information, visit thecharliedanielsjourneyhomeproject.org.
â
Check Out The Charlie Daniels Podcast!